Essay on Camel in English for Childrens and School Students

Camel is a beneficial and harmless animal. It can survive without water for several days. We have provided essays for children and school students. Select any one according to your necessity. 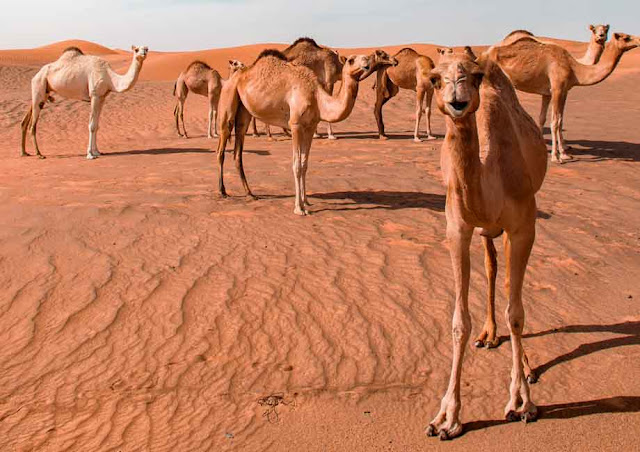 10 Lines Essay on Camel
1. Camels are called the ships of deserts.
2. They are also called because they can carry loads easily on sand.
3. It is a big animal.
4. Camel has a small head, a long neck, and four tall legs.
5. It has one or two big hunches on its back.
6. It eats leaves and thorny shrubs.
7. It can live for a few days without food and water.
8. It can forecast the coming of sand-storm in the desert.
9. It protects people and their goods during a sand-storm.
10. It is a beneficial animal.


10 Lines Essay on Camel
1. The camel is a four-footed animal.
2. It is found in countries like Arabia, Egypt, and Turkestan.
3. It has a big neck, four long legs, and a small head.
4. It has one or two hunches on its neck.
5. It is a beneficial animal.
6. It carries heavy load and luggage.
7. It moves very fast on the sand of the desert.
8. It can live without water for many days.
9.  We find many camels in the desert.
10. It is very hard working as a bullock.

100 words Essay on Camel
The camel is a four-footed animal. It has a very long neck. Its legs are long and thin. It has one or two hunches on its back. It is very ugly to look at. It moves very slowly. But it is a very useful animal. It can easily carry men and loads through the desert. It can live without water for many days.. It is also called the ship of the desert. It is as useful to an Arab as a cow is to us. They drink their milk and eat their flesh. It is very hardworking and painstaking like a bullock.

100 words Essay on Camel
The camel is called ‘the ship of the desert.’ It is generally found in Arabia, Egypt, and Persia. It has four long thin legs. The camels are of two kinds- Arabian and Bactrian. The Arabian camel has one hump, and  Bactrian camel has two humps. It can easily travel very long without getting tired on the sand of the desert. It can go without water for several days. In the desert, the milk and the flesh of it can be eaten. It eats leaves, and branches of certain trees and it loves to feed on the thorny shrubs which are grown in deserts. It carries heavy loads and people throughout the desert. So, it is a beneficial and patient animal.

Related Essays for Kids and School Students:
Essay on Cow
Essay on Dog
Essay on Cat
Essay on Monkey
Essay on Horse