Home Article Essay on Holi for School Students and Children's

Essay on Holi for School Students and Children's

Holi is the most popular festival in India. This festival unites people and creates brotherhood. We have provided a few essays on Holi for school students. Choose any one according to your requirement. 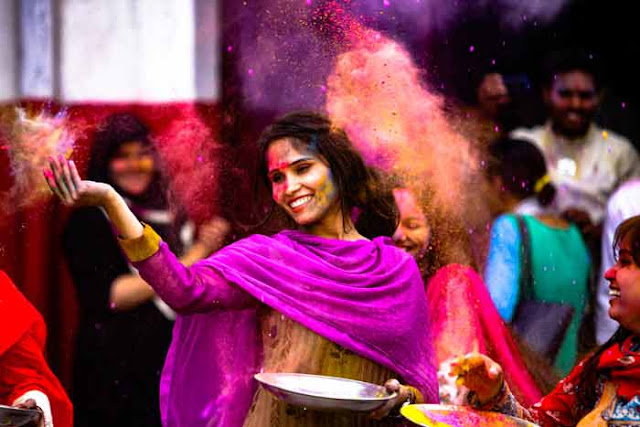 India is the most popular country for having so many festivals. Like other festivals, Holi is also one of the most famous festivals of India. It is the festival of colours. It is a famous festival of Hindus. It marks the beginning of a spring season. On this day everybody looks very colourful with different colours. The primary objective to celebrate this festival is to remove old grudges and enmity. On this day friends, relatives, and neighbours come together and throw coloured water at each other. People distribute sweets to their friends. This festival strengthens the relationship between friends and neighbours.

Essay on Holi (200 words)
The Holi or Dola Yatra is one of the famous festivals of colours. It is celebrated as a part of Dola Utsava on the next day of Dola Purnima. It is celebrated all over India to worship Lord Krishna and his beloved Radha. This festival comes on the month of March at the advent of spring season. On this day the idols Radha and Krishna are worshipped in houses and temples. This festival has a mythological background. It said that there was a demon called King Hiranya Kashyap. He wanted to kill his son Prahlad because he was devoted to Lord Vishnu. After trying many methods to kill his son Prahlad. He got an idea. He sister Holika has a boon that she would not be burnt by fire. So, Ultimately he asked his sister Holika to take Prahlad on her lap and sit on the burning fire. By Lord's mercy. Holika has burnt herself, but nothing happened to Prahlad. Thus Holi is celebrated.  On this day people come together and rub Gulal on the faces of friends, relatives as well as the neighbours. They sing dance and make merry on the roads and feed sweets to each other. During these dry colours should be used. It is preventive to skin diseases. But different chemical colours do much harm to us. The primary reason to celebrate this festival is to forget all enmity and embrace each other with love.

Essay on Festivals of India