Essay on Indian Culture for School and College Students 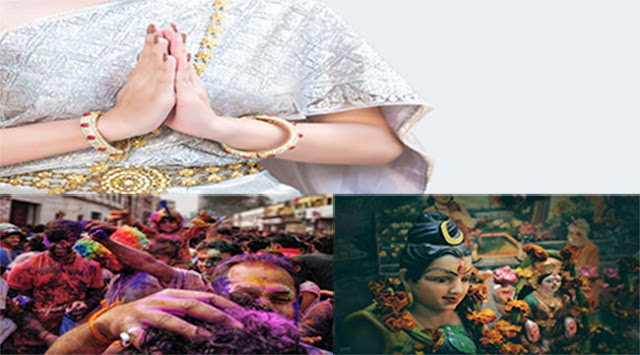 Each nation has its own culture. Its ways and manners, thoughts and actions reflect its independent identity in the form of culture. This evolves itself during the community life extending over centuries and deriving its experiences through its struggles and conflicts, failures, and achievements. It is the result of the nation's wisdom of the past and present as well. As the time passes, the civilization may wear out, but its core permeates into the current of the national life as its cultural heritage. The interactions of the nation's historical forces geographical conditions, political structures, intellectual achievements and emotional backgrounds may be considered its culture.

The Indians have their own culture which is the accumulated intellectual and spiritual wealth of this great subcontinent. It is called human culture because it is ingrained in human aspirations, human reactions, and human efforts. It is a pleasant blending of three streams of culture the tribal folk, the Harappans' and the Aryans'. We are the successors of this age-old culture which began five thousand years ago or even prior to it. When the Aryans entered India, they came across a new culture which was different from theirs. Dr. Topa in his book Indian Culture' says... "The Aryan-Dravidian conflict was between two worlds of culture. The victory of the Aryans did not destroy the Dravidian culture, rather a synthesis of both the cultures resulted in a new way of life. So, this Laid the invisible foundation of a new civilization on which the structure of Aryan Dravidian society was created."


The Indian culture has many facets. It is not a religion based on culture. It is free from religious fanaticism, it is philosophical with an ultimate goal to realize God. It is eternal and universal; it has never been narrow and limited. It is known as Anandi which has no beginning and Ananta which means endless. In spite of the incessant attempts of the invaders to annihilate this culture, it has survived because it has got the power of adapting, evolving and regenerating. Many civilizations and cultures have been annihilated on earth, but Indian culture has withstood a lot of trials an tribulations and survived still. This is the greatness of our culture. The family is the focal point of the society. Our culture has prescribed the code of conduct not only for social and political life but for the family life also. The ways of family life are the clear reflection of Indian culture.

Our culture has never opposed other cultures. It has accepted all the good things in others and has thus enriched itself. This uniqueness of our culture attracts the western people who have been disillusioned with their own materialistic lifestyle. Our Vedas, Upanishads, Bhagavad Gita, Ramayana, and Mahabharata reflect our culture. They enlighten us with their philosophical approach, remind us of the victory of good over evil and emphasizes the practical side of life such as jnana yoga, karma yoga, and bhakti yoga. Mahavira taught five principles to practice austerities and Buddha taught the middle path to control passions. All this shows that Indian sages, saints, and philosophers thought deeply over life and God three thousand years before Christ whereas the westerners started taking all these things only a few centuries ago.

Universal brotherhood is another characteristic of Indian culture. According to our sages, the human soul is a part of the great soul I e. Paramatma and so there s no difference between one person and another. All are bound by the chain of brotherhood. Our ancestors have opined that the world is one family. Our culture teaches us to rise above all meanness for the welfare of mankind.


Our culture is alive in our art, sculpture, architecture philosophy, dance, and music. The temples of Odisha and southern India, the caves of Ajanta, Ellora, Khajuraho are the symbols of our artistic excellence. They speak of the eternal greatness of our art, architecture, and culture. The tourists from abroad experience a spiritual reawakening when they visit these places. Indian music developed long before the Christian era has definite laws of theory and practice as well. There are three major schools of classical music such us: Hindustani, Carnatic, and Odissi. They derived their laws from Bharata's Natyasastra and Sarangadeva Sangita Ratnakara. The classical dances and folk dances are the two branches of Indian dances. The classical dances are Odissi, Bharatanatyam, Kathak, Kathakali, and Manipuri. The latest developments in the field of dance are ballet, a synthesis of both folk and classical.


We have the ‘Festivals of India’ is foreign countries to bring home to the foreigners our cultural heritage and it was a great success. The mountains like the Vindhyas, the Aravali Hills, the Himalayas the Nilgiris are closely connected with our culture. The sacred rivers like the Sindh, The Ganga, The Yamuna, the Brahmaputra, the Godavari, the Kaveri, etc. are the spectators of our cultural and historical development. In the words of Nehru: “ The story of the Ganga is the story of our civilization and culture of the rise and fall of empires, of great and proud cities, of the adventure of man and the quest of the mind which has so occupied Indian’s thinkers, of the richness and fulfilment of life as well as its denial and renunciation, of ups and downs, of growth and decay of life and death.


Indian’s culture is immortal and eternal. It has withstood the ravages of time and man, and nothing can annihilate it. We should try to keep our cultural heritage alive in us and hand it down to our successors.