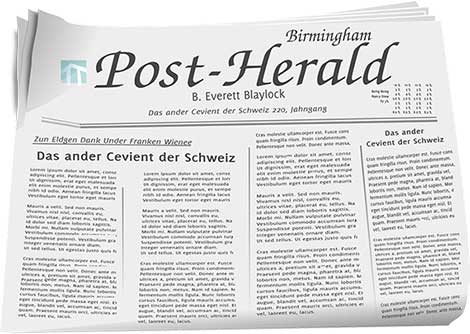 Reading newspaper is a good habit. Newspapers give the news of the world.They keep us informed about the day-to-day affairs.We have provided a useful essay on Newspaper for kids and school students.

10 Lines Essay on Newspaper
1. Most of us have had the habit of reading newspapers.
2. This has become a part of our daily routine.
3. Everybody wants to know what is happening on in the world.
4. And the newspaper helps them fulfil it.
5. India has her first newspaper in 1780 A.D.
6. Now we have a newspaper in different languages.
7. Some newspapers are daily, and some are weekly.
8. Newspapers give us the day to day news of the world.
9. They educate the public in a lot of ways.
10. So they are useful to one and all.

Essay on Newspaper (100 words)
Man is curious by nature. He wants to know what is happening around him. The newspaper is the best medium to meet this curiosity. The Primary object of the newspaper is to supply news. Greater space is devoted to political and economic news. There are also many sections, such as amusement sections, advertisement section, games and sports section, editorial column, the magazine section etc. The newspaper also has great educative value. It helps us to be informed about the current events all over the world. When we feel tired or lonely, we often take up a paper for relief.


Essay on Newspaper (300 to 400 words)
The modern man is curious to keep himself abreast with the latest developments in the ever-changing world. He cannot enjoy his breakfast unless he has the morning edition of newspaper before him. So newspapers play a vital role in man's life. Newspapers provide the views of people on various things. The views of great leaders and statesmen at the Press Conference or the public meetings appear in the newspapers.  The articles of great writers and thinkers and comments of popular statesmen on the political situations of the world, book reviews by great critics appear in the newspapers. Newspapers are the medium of advertisements. The producers and the industrialists advertise their latest products in newspapers to attract buyers. In this way, newspapers help the business world and promote trade.

Newspapers are the means, of propaganda. The leaders express their views through newspapers to mobilize public opinion. The editorials and the powerful articles on regional, national and international issues rouse public consciousness and mould their opinion. The public can express their views freely through papers. The statesmen can also address the public through the papers and thus bring home to them their reflections.  Newspapers, on the whole, bring together the statesmen and the public, the writers and the critics, the producers and the customers, the sellers and the buyers, the employers and the unemployed persons, the missing children end their parents and so on. Newspapers bring out situations lying vacant, matrimonial advertisements, death, films running in different theatres, sports news, quiz, etc. Each newspaper brings out a literary column for persons interested in literature.

Newspapers are the guardian of people's liberty. They shoulder every responsibility in the greater interest of the State. So they should always be conscious of their duty towards the society. The Editors should try to keep their papers free from any external influence. They should still maintain a neutral policy and bring out thighs without any fear or favour. They should verify the truth of every bit of news before they provide it with a place in their respective papers. The newspaper always has a powerful impact on the public. So they should be the symbol of truth and justice.