Essay on Computer for School Students - Importance and Uses

In this modern age, the computer is used all over the world. It is very important for us. We have provided a useful essay on the computer in different word limits. You can select anyone according to your necessity. 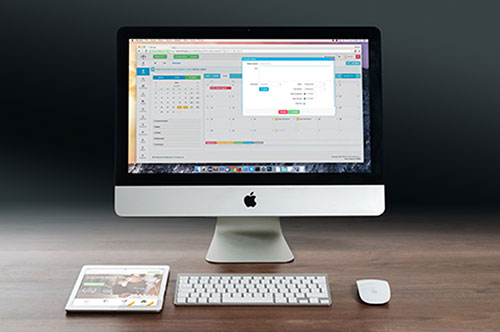 1.  The computer is a modern electronic device.
2. At first, it was a mere calculating machine.
3. It works better and quicker than man.
4. It has a machine (CPU),  a monitor, keyboard, and a mouse to operate it.
5. People use it in offices, hotels, companies, etc.
6. Every young man today is interested in it.
7. We can even watch the cinema on the computer.
8. It can print out papers and receipts.
9. The computer does a lot of work for the man.
10. So the present age is the age of the computer.

The computer is an electronic device. It helps man a lot in various fields. Man depends on it more and more because of its quickness, accuracy and safe preservation of facts. At times, it is found committing errors. But it is not responsible for them. If a man is a little careless in feeding facts, it is natural that the computer will yield him wrong results. Man gets tired but not a computer. It goes on doing its work without rest. It works of its own accord with man's little assistance. There is a computer in hotels, shopping malls, government departments, and banks. In many institutes, students have taught how to operate a computer. It is a very useful and helpful device to the humankind.

The man has always tried to overcome the limitations of himself with the help of various inventions. He has invented automobiles or planes for his speedy movement, the radio, the telephone, television for his ears and eyes, machines for muscles and so on. These inventions are really the wonders of our civilization, but the invention of the computer is the wonder of wonders because it adds to man's intelligence and increases quickness and accuracy of his brain.  It helps a man in every field. It can make calculations quicker and more accurate than man's brain. So it is used in industrial concerns, banks, railway stations, factories and hotels in western countries. It is also used in educational institutions of the developed countries to evaluate the examination answer books. The safe preservation of files in the office, preparation of statistical data and their preservation can be done with the help of computers. It helps a man increase the Industrial production and trade and business. India is trying to introduced computer in various fields. Though its use in our country is in its infancy, it is growing popular day by day. Computer education is spreading all over the country and in the twenty-first century.  Let us hope that it will be used for the benefit of the world.

Introduction:
The computer is a modern electronic device. It has been used by man for the last fifty years. A full-fledged computer was first prepared by Professor Eikenes and his colleagues of Harvard University, U.S.A. İn 1944. Since then its technique has been used all over the world. It is now helping a man in various fields such as: in agriculture industry, scientific facts collection, space research, diagnosing diseases, controlling traffic, preparing plans of machinery, defence, etc. So we rightly say the computer has brought in a revolution in every field in the modern age.

How  computer came into use:
Man first started counting with the help of his fingers. Then for keeping his accounts, he drew lines on the walls of the cave. He used pebbles, shells, etc. in counting. In the thirteenth century, he used small balls for counting. John Napier prepared a set of multiplication work. Blaize Pascal made a small machine for addition and subtraction of numbers. Leibniz invented the machine which could do the four ways of calculation such as addition, subtraction, multiplication and division. Charles Babbage made another instrument which, besides doing the mathematical calculations, could keep them in its memory. When facts were fed to this instrument, its answer came as its output. In 1890, Herman Hollerith prepared a tabulating instrument. In 1842, William Burroughs prepared a calculating instrument which looked like a typewriter with a keyboard, and it could type the numbers easily. Then Aikens and Hopper prepared the computer for common use. Then various computers like the generation computer, microcomputer and at last supercomputer have been invented in later years.

Medical Treatment:
It helps doctors diagnose various diseases easily accurately and cure them. The scanning instrument can take the inside photograph of the whole body and locate the trouble spots and thus help doctors a lot. The deadly diseases like tuberculosis, ulcer, cancer can be cure when they are located at an early stage with the help of a computer.

Space Research:
Man sends space-crafts equipped with computers into space to study the possibilities of life on other planets. The time will come when computers will help him set up colonies in outer spaces. Some satellites fixed with computers are sent into space to study weather, locate minerals in the earth's crust and so on. In the advanced countries, Robot, the computer man is used in fields of industries, agriculture, trade and entertainment.

Conclusion:
The day will come when man's civilized life will be completely dominated by computer. It will be a household thing soon. Now the question arises whether the computer will prove a blessing or curse toman in his life. It cannot be predicted so early. If it is misused, like a demon, it will come forward to destroy its creator. Now the scientists are trying their best to make use of it in the service of man. It is the greatest discovery of the modern age. Let us hope it will be used to benefit the world.