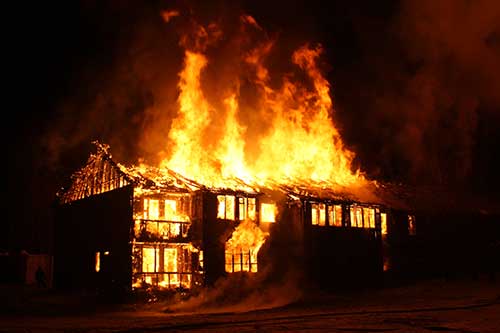 House on fire presents a very sorrowful sight. Last  Sunday I was sleeping at night on the roof of my house. At about midnight I was suddenly awakened by cries of 'fire fire'. Looking outside, I found that a house was burning nearby. I rushed out with my two brothers and soon reached the place. I found that the house of Chand Kumar Mahato was burning. People were throwing water from buckets and sands in their hand, but a strong wind was blowing, and their efforts were in vain. The Fire Brigade, however, came there soon after and the fire was brought under control in an hour. By that time half of the home had been burnt down.Shri Chand Kumar Mahato suffered a heavy loss. It appeared that he would have to rebuild his home once again.  Afterwards, it was found that the fire had been caused by the negligence of Ramu, the servant of the home, who had gone to sleep with a burning cigarette on his lips. Later on, the cigarette fell on his bed, and the clothes caught fire. This fire spread and soon the whole building was burning. The owner of the home suffered a significant loss.

Essay and Paragraph on Drug Addiction

Paragraph and Essay on Terrorism