Essay on the Himalayas in English for Children's and School Students 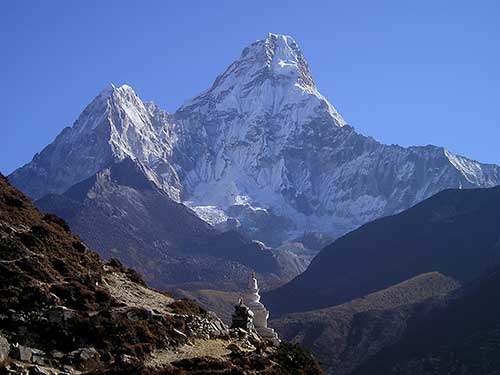 The word Himalaya comes from two Sanskrit words Him and Alaya which combined means the house of snow. As these mountains are always covered with snow, the name Himalayas has been given to them. The Himalayan mountain range is situated to the north of India. It spreads from the north to the west for fifteen hundred miles. It is also eighty to one hundred and fifty miles broad. The highest mountain in the Himalayan mountain range is Mount Everest. Two brave mountaineers. Tenzing Norgay and Edmund Hillary first reached its top in 1952.There are many hill-stations in these mountain ranges Srinagar and Darjeeling are the places where rich people and tourists go during the summer season to enjoy the beautiful scenery and to improve their health. The hill people are generally simple, strong and honest. Many rivers flow out of the Himalayan mountain range which is full of water throughout the year. Many forests grow in these mountains which give us valuable wood and herbs from which medicines are made. Tea and coffee are also grown on hill slopes. During the rainy season, water evaporates from the Indian Ocean, travels north, at last striking the high mountains of the Himalayas. This causes rainfall throughout India. This is known as the monsoon which is a great boon to the farmer. This high mountain range has also stopped enemies of India from coming into the country for thousands of years. Thus the Himalayan mountain range is a great blessing to the people of India.Related Essays and Paragraph for Children's and Students:
Essay on A House on FireEssay on Visit to a Hill StationEssay and Paragraph on Rainy DayA Brief Essay on Green Revolution in India Short Essay on Spring Season Essay and Paragraph on Environmental PollutionEssay on Winter Season