The Red Fort is one of the famous buildings of Delhi. It is made of red sandstone.It was constructed in 16th century by Mughal emperor Shah Jahan. It is situated on the west bank of the River Yamuna. It was built by Shah Jahan, in a Mughal Emperor. Chandni Chowk, the well-known market of Delhi, is near the Red Fort. A similar fort was also built under the orders of the Emperor at Agra. This is now known as Agra Fort. This faces the Taj Mahal, on the opposite side of the river. Some of the notable rooms in the Red Fort are the Diwan-i-Khas beautifully decorated with ivory figures and precious inlaid stones. These decorations remain through the precious stones have long been taken away by robbers from time to time. The world famous Peacock Throne was also placed here.It was taken by Nadir Shah to Iran after his conquest of Delhi. 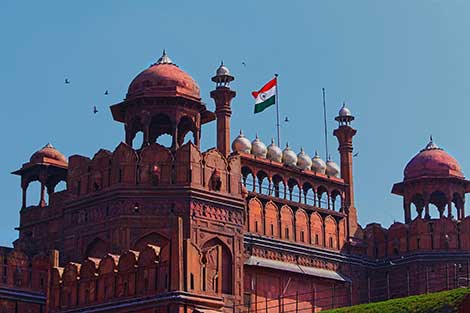 During the British Rule, the famous trial against the officers of the Azad Hind Fauj led by Netaji Subhash Chandra Bose took place here. Nowadays our Prime Minister unfurls the national flag here on 15th August every year to observe the Independence Day and gives his message to the nation. Other notable things in the Red Fort are the Moti Masjid, the War Museum and Hammam (Royal bathrooms). We can see the Red Fort only by purchasing tickets, which are available just outside one of the gates of the Fort.It makes us remember the days of our slavery, and we should take a vow to work to uphold independence.