True love and respect for your country are called patriotism.We have provided a helpful essay on Patriotism for class 4, 5, 6, 7, 8, 9, 10, 11 and 12.You can choose any one article according to your need.

For a man, nothing on earth is more significant than his motherland. Everybody loves their own country, feels elated at her prosperity and sad at her adversity. Patriotism is the sense of love, affection and belongingness aroused in one's heart for his or her country. It is something higher and nobler than ordinary emotions and sentiment. It inspires even a  zero to act like a hero at a critical moment and do the deeds of bravery. An instance from the pages of Indian history shows how about five hundred Brahmins of Sialkot, who knew not the ABC of warfare, gave a  strong resistance to Alexander, the Great and sacrificed their lives for the sake of their motherland. This is a burning instance of true patriotic.Everybody must have the sense of patriotism, and it should be limited to the welfare of his own country. It is not really patriotic to hate other nations or wage wars on other countries. Shouting the slogans of regionalism and communalism and trying to win the hearts of a particular sečtion of people is cheap patriotic. The real patriotism is to join the mainstream of the country and dedicate oneself to the unity and solidarity of the nation. 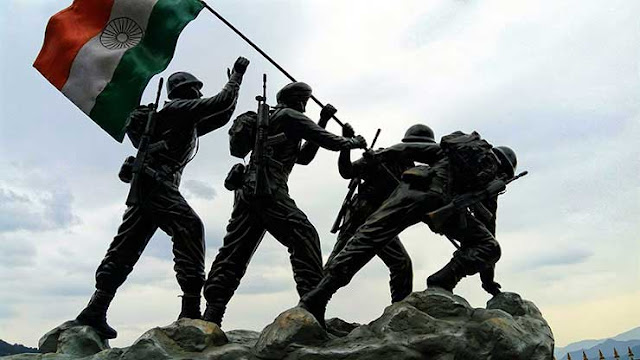 What is Patriotism?
Our country is very sacred to us. It is closely associated with our civilisation and culture. We live on the fruit of her trees, the water of her streams and the food grains of her land. And each drop of blood in our veins is her gift. Her air has given us the life breath, here we have uttered our first word, and we will also close our eyes like our forefathers for ever. So, our sense of belongingness for her land, her rivers and streams, hills and valleys, trees and plants, her living creatures, her language and culture is patriotism.


Types of Patriotism
Patriotism is seen in different forms. The true statesmen contribute their selfless service to their country and countrymen and thus enhance the prestige of the nation in the international field, This is a kind of patriotic. A true citizen performs his duties to his country to his satisfaction and exercises his rights reasonably. The way of showing loyalty to the nation is an instance of patriotism. The reformers generally oppose superstitions, exploitations, oppressions and polluted traditions found in the country and raise the voice against them. Their work reflects their sense of patriotic. Another type of patriotic is defending the nation from enemies. We remember Rana Pratap, Shivaji, Laxmi Bai, Tipu Sultan Garibaldi, Gandhiji, Netaji, Shastriji because they dedicated themselves to the cause of the respective countries and countrymen.

Patriotic by Evil Persons
There are scoundrels and evil persons who have done no service to their country. At the time of the election, they try to the Public through empty promises. But once they come to power they think of their self and go on increasing their bank balance. So, Dr Johnson has rightly said: 'Patriotism is the last refuge of a scoundrel.'

Too Much of Patriotic
The excess patriotism of the national leaders brings ruins to their country. Napoleon, Mussolini and Hitler were extreme patriots. They loved their respective countries so much that they hated other countries/nations and created war-havoc in the world and dragged their lands to destruction. Such excess patriotic is detrimental to peace, progress and prosperity of a country.

The Real Test of it
There is no scarcity of patriots in the world, but how many of them are real patriots in their thoughts and deeds? A real patriot is ready to shed every drop of his blood for the welfare of his nation. But his sense of patriotic is entirely different from that of Napoleon or Hitler. It is sincerity and sacrifice combined. Gandhiji was a true patriot because he made use of every moment of his for the welfare of his countrymen. Netaji Subhas is also a patriot of this order. His ambition was that Indians should get back their freedom with every honour. Under his leadership, the Indian National Army invaded British India from the east, defeated the British army, occupied a part of Assam and hoisted India's free fag at Kohima. This sort of patriotism is rare in the world.

Conclusion
Everybody can do something for the country. We should do something that could make our nation more developed.