We cannot reject our dreams merely calling them illusions. They are out unfulfilled desires. At times, our mind is dominated by some ambition. This takes shelter in our subconscious mind and appears as a dream. Our subconscious self-dreams while our conscious self is fast asleep. This gives up a sort of satisfaction.

The Dream I had:
I have a strong desire to be a great space-scientist and do research work in space science.This passion of mine has dominated my mind so much that it once appeared in my dream. It was a summer night. I slept very late. Probably towards the end of the night, I was in a dreamland.

Ready to Travel into Space:
In my dream, I saw that I was a space-scientist Sriharikota. I, along with my co-scientists, have achieved success in preparing a spacecraft which was ready to be launched at Mars. Our sole aim was to study the possibility of life on the planet so that it would facilitate us to set up colonies in future.

The Rocket Launched for Mars:
The date and time for launching the rocket, along with the spacecraft, had already been fixed. Two of my colleagues and I had been chosen for this travel to Mars. Everything had been arranged in the spacecraft for our study and research work. We were ready in our space-dress, specially designed for the purpose. We entered the craft and eagerly waited for the launching moment.

At the right moment, the Director of the Space Research Centre pressed the button. With a loud noise, our rocket shot up into space. It was a marvellous experience for us. We travelled on and on at lightning speed. After some hours of journey, we crossed the border where the gravitational force of earth comes to an end. We entered the zone of Mars.

The computer in our space-craft showed us everything. We were happy to think that we were heading towards Mars, the unexplored planet. The gravitation of Mars acted upon our rocket, and its speed increased more and more. Suddenly we saw a speck at a distance. We tried to ascertain what it was. 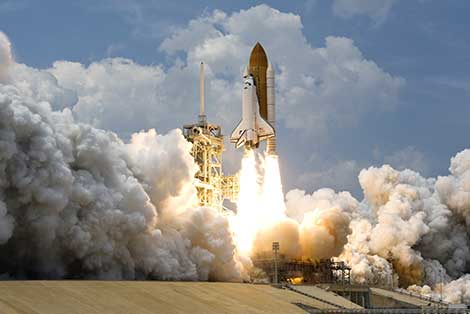 We Encountered a Flying Saucer on our way:
After travelling some distance, we found that it was in the shape of a saucer with an elevated portion in the middle. We thought that it must be a flying saucer. Now we tried to study its direction and speed as well. We are shocked to find that it was coming towards our craft at high speed. We anticipated danger. We sent out signals through our computer but in vain. It defied all such signals and rushed at us.

A Ray Light:
Now we were sure of a collision. We launched powerful missiles to destroy it. The missiles struck the mysterious saucer one after another but produced no effect. We were puzzled. We sent out computer radio-waves to change its direction, but it was of no avail. Then we tried to divert our craft from its course. This effort also proved a failure. So a ray of light came out of the flying saucer. As it touched our craft, there was a great explosion.

I found myself in my bed:
I got up horror-stricken. My space adventure is over, and now I am in the world of reality. I felt relieved to find myself lying in bed. This is all about my strange dream I had last night.

Unemployment Problem
Essay on My Hobby