I recall an occurrence that happened a year ago. It is unforgettable in my life. I, along with my father and some of my neighbours, was to attend a dinner party a few kilometres away from our place. We decided to go by Jenna Uncle's car. On that day his car driver was on leave. So, Jenna Uncle volunteered to drive the car himself. It was already 9 pm. We had a late start because of some other engagements. However, we had a hope of reaching our destination in forty minutes.


Jenna Uncle was Driving the Car:
The weather was somewhat not good. It was drizzling. The place we were going to attend the dinner party was on the highway. So we thought it would not be a problem for us to go there. We were nine members in all. Two of us was to get down on the way because he had some other engagements. Now our car moved on Jenna Uncle was no doubt a good driver. The car seemed to get back its life under his expert driving. We left the town for a few minutes. It was still drizzling. The night was dark and gloomy. Our car was heading to our destination. On the way to Narendrapur, Sadangi Uncle got down. Then we moved on. The vehicle gradually picked up its speech. I was sitting in the back and was peeping into the speedometer. We passed Tanganapalli and then Bhabandha. At that time our vehicle was running at the speed of eighty kilometres per hour. But we were sure that Jenna Uncle would manage the show well. 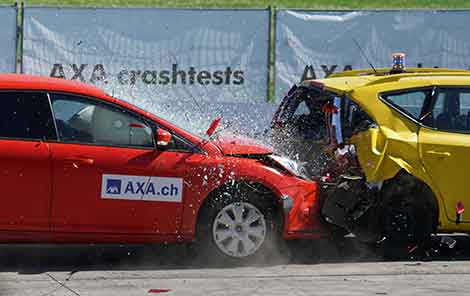 Jenna Uncle Suddenly Sighted a big Hump just before a Bridge:
Just before a bridge, on the way, there was a big hump. But Jenna Uncle had no idea about. As he suddenly sighted the hump before him, he tried to apply the brake to check the speed of the vehicle. But the road was slippery because of drizzling. So the car had a sudden skid, and it somehow turned to the right before the bridge and rolled down into the low-land. The doors of the car broke off as it rolled down and we were thrown out of it one by one. Out of the seven members, only three sitting on the front seat was in the car, Others lay on the ground. After rolling down so many times, the vehicle was found erect on its wheels, and its lights were still on. But it was facing the direction of where we had made a start.


All were shocked and, we lay unconscious:
There was silence all over the place. All except myself had lost their consciousness. The sudden accident shocked me so much that I became speechless for some time. I found Shiva uncle, Das uncle, Sahu Sir, Jenna uncle and my father lying scattered in the field. Mruthunjaya and Prafulla were inside the vehicle like me. But they were as good as dead. I am quite at my wit's end. Probably the drizzling rain helped the crew to get back their consciousness. Everybody had got some injuries in the accident, but they were not major. I was quite conscious of my surrounding till Jenna Uncle applied the brake and soon I felt the vehicle upturned, rolling down the low-land beside the road. The sight had shocked me so much. I was speechless for some time. But gradually each of us came to our normal state. My father was happy to see everybody alive.

Conclusion:
We found our car completely shapeless, unfit to take us back. Fortunately, a scooter happened to pass that way. Its rider was kind enough to go back to the nearby village and arrange a truck to bring us back. The truck took us to Medical College Hospital. There we had medical aid for our injuries and made for our respective homes. This is all about the unforgettable experience in my life.