Home Article A Brief Essay on National Integration for College and School Students for Class 8, 9, 10, 11, 12

National Integration means bringing together all the people of the country into a single whole. It is the way of doing away with all differences, big or small, which cause factions in the people and split them into various groups. Such integration is based on the positive sentiment that we all belong to a common culture and a common heritage. This sentiment gives outlook free from narrow feelings and considerations, in the interest of the nation and national peace. It instils in us a sense of unity, solidarity and peaceful co-existence. It makes us think that we are Indians in our thought and action, It gives us a sense of belongingness, i.e., we belong to India and India is ours.

The Western Opinion about India:
Some Europeans say that India never existed as a single whole-unified and undivided. Even some Indians, who believe the Western opinion, say that in the past, India was never one nation. But this is all wrong. If we survey our religion, philosophy mythology, legends, art, architecture, sculpture literature, etc., we will know well that India existed as a single whole in the past. It is true that ours is a land of diversities, but this does not show our disunity. Our literature, epics and folklore are the instances of our unity in diversity. In ancient India, religion and language played an import role in creating national and emotional integration in our people. The rise of Jainism and Buddhism and faiths like Shaivism, Vaishnavism created some factions in our unified religious feeling only for a short interval, but this did not disintegrate the whole nation. The invocation of the rivers like the Sindh, the Ganga, the Jamuna, the Narmada, the Cauvery is the common ritual done by the Hindus all over India. The concept of Aasamudra Himalaya has been an inspiration to our sages, poets, rulers down the ages, and this has been a factor for the integration of our country. The languages like Sanskrit and Pali was invariably used all over India, paving the way for our unity. The ancient sages like Valmiki, an untouchable, Vyasa, Kabir, a Muslim weaver were given high esteem in the Indian society. This shows our nation was above all feelings of birth, race, caste and creed. The four pilgrimages of Hinduism on the four ends of the country show that India has been one all the time. 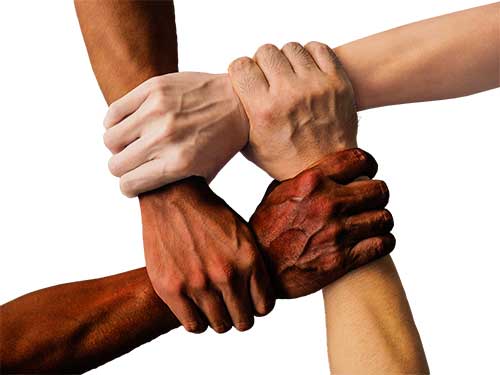 Social  Distinction  in Medieval India:
The distinction of relígion, custom, tradition appeared only in medieval India, But the Bhakti cult bridged the gap and brought people of different faiths together. It is true that some bad elements appeared on Indían scene which tried to weaken the country's unity. The English started here the policy of 'divide and rule' for their benefit. They tried to separate the Muslims from the mainstream of national life. They created a gulf between low-caste and high-caste people and set the English. Knowing urban people against the country folk. In spite of all these, the whole country was under one rule i.e., the British rule. The development of the means of transport and communication, The introduction of English as a common language and the uniform laws roused national spirit in every Indian and them to fight for a common cause- the cause of freedom.


Our Constitution shows solidarity:
India has a cultural heritage founded on tolerance, secularism and peaceful co-existence. Our Constitution provides a strong Central Government to check the disintegrating forces in the country. It provides rights to equality, freedom and security to every Indian regardless of their caste, creed, colour, language and region. The country has been declared secular making every provision for minorities, scheduled castes and scheduled tribes. As India has progressed a lot in various fields since her independence, she has been an eye-sore to some of her neighbours and some Big Powers of the world. They all try to create disintegration here.

The Obstacles in the way to Integration:
There are some obstacles in the way of national solidarity, such as casteism, communalism, regionalism, etc. The ancient Aryans created castes for the division of work in the society. And in those days, there was no ill-feeling between one caste and another. People could change castes as per their need. But afterwards, ill-feeling grew between one caste and another. Out national leaders have taken steps to bring the low-caste people and the hi tribes up. But besides this, they should develop the economic condition of the poor through concrete economic measures.

Ours is a country of multi-languages; and it becomes a problem when a particular language is regarded as the national language, It is true that Hindi has been given the status of the national language. But it is opposed by the people of the southern part. So this language problem should he tackled with love, understanding and peace. Communalism is obstacle to national integration. There have been lots of communal riots before and after the partition of India. So we should be very careful while dealing with this delicate problem. Regionalism is another problem before us; It arises when a particular region remains backwards in every respect. So our planning should be made in such a manner that no region feels neglected.

Conclusion:
It is a herculean task to maintain the whole country together. Our national leaders should realise the urgency of this task. There are, of course, some dirty political leaders who, for the sake of position and power, create disunity in the country. But this should be curbed at any cost. Our leaders should set examples through their word and deed. We should have a National Integration Council to recommend ways to strengthen our unity. We should not fall prey to dirty feelings which are opposed to the national integration We should always remember that united we stood and divided we fall.