A man has been trying to fulfil his necessity with the help of revolution. Once the Indians were in need of independence. So, they started a revolution- the freedom struggle against the British rule and achieved their long- cherished freedom. But it was only political freedom, and the economic freedom was yet to come. The economy of our country was in a miserable state because of the long foreign rule. Our food production was not enough to feed our large population. So in order to meet the growing demand for food, we imported food grains from other countries. But this was not a permanent solution to our problem. It did tell our prestige. A free nation which dreamed of occupying an honourable place in the international field should not depend on other nations for her food. She should try to be self-sufficient in food production. So she started another revolution in the field of agriculture. This is called Green Revolution.


The Condition of agriculture in India:


Agriculture is the primary occupation of about seventy percent of our total population. So the economy of our country is closely associated with agriculture. But the methods we followed in this field were quite old and outdated. The Mughal and the British rulers did not try to bring about any improvement in the country's agriculture. Moreover, our agriculture solely depended on the mercy of the monsoon winds which blew only in a particular season. As the nation lacked irrigation facilities, agriculture was not possible in other seasons. Besides, the monsoon rain was not equally distributed all over India. So agriculture in some parts of the country failed because of scanty rainfall. Moreover, the Indian farmers followed the traditional methods of agriculture. So the yielding was very poor. This was the reason why the reason why our economic condition remained quite miserable.


The food problem was the first and foremost problem India faced when she got her independence. This is because the production in the field of agriculture was quite insufficient. So she had to import food grains from other countries. This had its adverse effect on our already weak economy.  freedom struggle against the British rule and achieved their long-cherished freedom.In order to keep up the prestige of the nation and lessen the burden on our economy, the government had to think seriously over this problem. They made plans to increase our food production with a view to making this country self-sufficient. As some industries are based on agriculture products, we took steps to grow more the cash crops like sugar-cane, jute, cotton, tea, coffee and groundnuts. 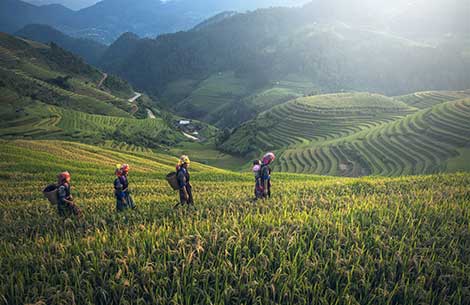 
Our Government was bent upon bringing about some revolution in the field of agriculture. So, they introduced five- year-plans in the country. The first five-year-plan began in 1951 with an aim to provide irrigation facilities to our agriculture land. They built up river-valley-projects such as BhakraNangal Project, Damodar Valley Project, Tungabhadra Project, Nagarjunasagar Project and so on. These projects helped us irrigate our agriculture land all the year round and also produce electricity. More and more river-valley projects came up in the succeeding five-year-plans. The Indian farmers were taught the modern methods of agriculture. They were extended every financial help and encouraged to make use of their land and labour all the year.


Research Centers in the Country:The agriculture research centres in the country produced a variety of high.yielding seeds and supplied them to the farmers to grow more food grains. The farmers were taught how to use scientific agriculture tools, high yielding seeds, fertilisers, pesticides, etc. for better production. A number of fertilizer plants were set up all over the country to meet the growing demands of fertilizers. The agriculture experts were sent to the countryside to aid and advise the farmers for more production. The peasants of Punjab and Haryana first brought about a revolution in agriculture. With the help of their respective governments, they made a record in food production and thus set an example before the farmers of other states of India, Gradually this green revolution spread to other parts of India. The agriculture research centres are trying to produce new varieties of seeds to grow more crops. The farmers who make record production are duly rewarded by the Government. Now, most the farmers in our county work hard on their land and grow three to four crops a year. They produce not only food crops but cash crops like jute, cotton, sugarcane, tobacco, oil-seeds, etc. The green revolution has made our economy strong and helped us set up more and more industries. Now our country has become self-sufficient in agriculture products and she is a position to export them to other countries of the world and thus can foreign coins.


Conclusion:
In our country, the number of small farmers and farm workers is more and the major part of agriculture land is owned by a limited number of people who rarely take interest in agriculture. So steps should be taken for an equitable distribution of land among the people so that the real farmers will be encouraged to work with zeal and produce more for the nation. Besides high-yielding seeds, agriculture tools and fertilizers should be provided to our poor farmers at reasonable prices. At times, the irresponsibility of the agriculture department puts the farmers at a heavy loss. So the Government should take strong steps against such lapses because the loss to the farmers is a loss to the nation as a whole. More and more patches of land in the country should be provided with irrigation facilities, and standing crops should be kept safe from natural calamities and insect menace. It is found that a lot of agricultural lands is being used for setting up of industries and construction of houses. This will tell upon the total agriculture production of the country. So our Government should take steps to stop such practices. Then we will enjoy the fruits of our green revolution.