India, with a total population of about 1.324 billion, is the largest democracy in the world. As per her Constitution, she has the Parliamentary democracy. This system of democracy has been borrowed from England. But it is not a new thing for a country like ours. Though there was a monarchy in ancient India, the kings in those days were not autocrats. Like our present Parliament, there were two houses of nominated and elected members to aid and advise the king, and there was a council of ministers to the king in smooth administration. Even there were instances of the kings elected from among the people. But in our present democracy, the head of the State is the President, indirectly elected by the people.


Sovereign Power of Democracy:
The sovereign power of our democracy lies in the hands of the people.The people elect their representatives to the  Parliament which enjoys the real sovereign power. Every Indian citizen has been provided with some Fundamental Rights. He can cast his vote every five years to elect his representative to the Parliament. In our democracy, the party or parties enjoying the majority in the Parliament run the government, but they never ignore the opinion of the minorities. 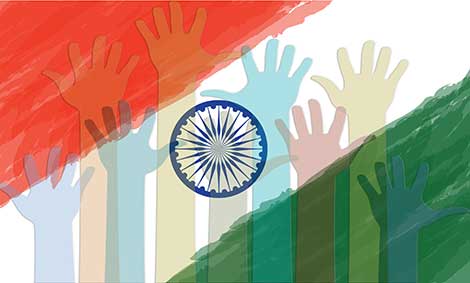 The Opinion of Political Experts:
When we had the first general election for our Parliament, the political experts of the world thought that democracy would utterly fail in India. It is because the economic condition of post-independent India was quite miserable and most of the people were illiterate. But democracy proved a success here. Our countrymen chose the right party and the right representatives to run the government. And at every general election, the choice of our people has been wise. When they had bitter experience during an emergency, they changed the Congress government through the ballot and brought in the Janata party to power in 1977 with a hope to have better administration. But when the new party failed to stand together, our countrymen again expressed their opinion in favour of Congress. This was repeated in 1983 and 1996 elections. So the political expert's prediction proved wrong. This is the strength of our democracy.


Minority communities enjoy our Democracy:
In Indian democracy, the minority communities enjoy equal rights along with others. They live a secured life here. The poor, the downtrodden and the hill-tribes also enjoy all economic and political rights like the affluent and the high castes. The freedom of the Press is another special feature of our democracy. The Press can freely express their views here without any fear or favour.

Weaknesses:
Despite all these plus points of Indian democracy, it has had some weaknesses. Each general election for the Parliament costs crores of rupees. We also incur expenses at elections for State Assemblies and Local Self Bodies. All this is collected from people by way of taxes. But compared to the expenses incurred, the outturn of our democracy is not satisfactory. The elections are scheduled to be held once in every five years. But, in reality, they occur more than once during the scheduled time. The government are formed and toppled very frequently because of their instability.

Moral Values:
There has been an erosion of moral values in Indian politics. The so-called representatives of our people, once get elected, look after their interest, forgetting the interest of the nation. They frequently change their loyalty to the party or the government for the sake of power and money. The democratic India is full of scams and scandals, and the people's representatives are involved in them. This is the poor show of our democracy.

The negative side  of our Democracy:
The democracy in India has had the experience of about five decades and has made eighty-five-year plans for her economic development. We have borrowed money from the World Bank to build up our economy. It is true that we have made a lot of progress in various fields during these sixty years, but our per capita income is very low in comparison to other countries of the world. About forty percent of our population is still below the poverty line. All our economic plannings fail to yield any desired fruit because of our insincerity and dishonesty. Another problem that our country faces is the terroristic activities in her border states. The terrorists fed by foreign agents take advantage of our weaknesses and cause a lot of bloodshed with no definite aim before them.
Our country of diversities:
Ours is a country of so many diversities, But the sense of Indianism has kept us all one and united. Unfortunately, for the sake votes, some dirty political leaders create rifts among people in the name of caste, creed, faith, colour, language and region. If such nuisance goes on unchecked, what will be the fate of this largest democracy.
Conclusion:
Now it is high time to realise the problems our democracy faces today. The people should be properly educated so that they will understand their role in making the right choice at the elections. They should be ever vigilant, and this is what we require to make our democracy a real success