A teacher is an integral part of a student's life. A good teacher can make student life more comfortable. A teacher gives knowledge to a student. With education, a student knows the difference between right and wrong. We have provided essays on Teachers Day and Dr Sarvepalli Radhakrishnan for class 1, 2, 3, 4, 5, 6, 7, 8, 9,10. Choose any one according to your need. 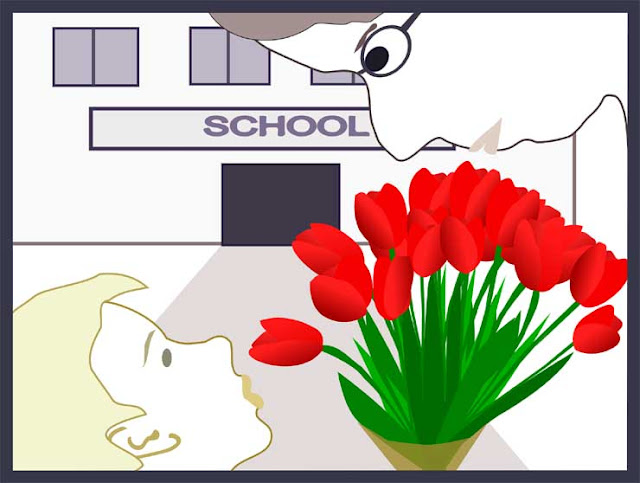 1. 5th September is called the Teachers’ Day
2. It is also known as the birthday of Dr Sarvepalli Radha Krishna.
3. He was the first vice president and second president of our country
4. He was a great teacher.
5. This day is celebrated with great joy and happiness.
6. In many schools, various cultural programmes are organized.
7. In some schools, teachers are awarded.
8. Students offer their regards to their teachers on this day.
9. Meetings are held to discuss the importance of the day.
10. So a healthy relationship is built between students and teachers.

September 5th is the Teacher's day in our country. It is the birthday of Dr Sarvepalli Radhakrishnan. So the country observes his birthday as the Teacher’s day. On that day we garland the picture of Radhakrishnan. He was the second President of our country. He was a great teacher and learned man. This day is celebrated in almost all schools and colleges. On that day, we go round the town and collect money from the people. This money goes to the teacher’s fund. We pay homage to the teacher's community. The teachers are the backbone of the country.

The masters and the teachers have an essential role in the formation of the nation. Therefore, it is always worshipable. In India, it is considered to be the form of knowledge and worship. Dr Sarvepalli Radhakrishnan was a great Teacher. He was a well-known and renowned teacher throughout his life. He is the first vice president of India from 1953 to 1962 and second president of India from 1962 to 1957. His birthday is well known all over India as a teacher's day. This day is on 5th September. In schools and colleges, prizes are given to the best teachers on this day. This day is celebrated with enthusiasm and significant preparations throughout the country. In the state capitals, the teachers were honoured for his services and celebrations are done in public. In front of the teacher, public events are done in the school.  School students and girls present special functions in honour of their teachers, show their gratitude by giving gifts. It is also appropriate that in a country like India, where the Guru-disciple has been an unbreakable tradition, Our teachers and gurus are even considered to be bigger than God. We all sound respect our teachers.

India has a healthy tradition of honouring teachers. In the past, a teacher was regarded as Brahma, Vishnu and Shiva. The disciples tried their best to attain love, affection and blessing of their teachers. They believed that all this would help them achieve success in their life. Vasishtha, Viswamitra, Sandipani, Yajnavalkya, Dronacharya, Kripacharya Chanakya was all the ideal instructors of the past. On the other hand, Upamanyu, Aruni, Sri Krishna, Arjuna, Karna, Chandragupta Maurya were disciples of a great order. Inspired by the high ideals of those great educators and disciples of the past, present India has introduced the celebration of the Teachers Day to show honour to her teacher community.

The Teachers’ Day is one of the national days observed in the educational institutions of India on 5th September every year. It is the birthday of Dr Sarvepalli Radhakrishnan, the great teacher, philosopher and statesman of India. He was the first Vice-President and the second President of free India. So, 5 September is celebrated as the Teachers Day to pay respect not only to the great teacher community of India as a whole. We have been observing this day since 1962. On the occasion of Teachers Day, meetings are held at schools and colleges. Students and teachers pay homage to the great teacher Dr Radhakrishnan. Then students offer their love and respect to their teacher; and in return, the teachers bless them and wish them every success.

In the ancient Indian tradition, the educators were given the highest place in the society. Our Shastras say that we should offer our prayer to our teachers first and gods next. In the past, the student-teacher relation was clean and healthy. But this has deteriorated nowadays because of the influence of materialism and western culture. The Indian students do not show due regards to their teachers. And the teachers, on the other hand, fail to set themselves an ideal before their students. The government directives sent to the educational institutions to celebrate Teachers' Day appear artificial. It would be more befitting if the parents inspire their children to celebrate this day with proper enthusiasm.

Dr Sarvepalli Radhakrishnan was born on 5 September 1888 in Tiruttani village, a centre of Shaivism. His father was Sarvepalli Veeraswami, a priest by profession, and it was difficult on his part to make both ends meet. Radhakrishnan, in his childhood, was calm, innocent and straightforward. He had his primary education in his village Mission School. He passed his entrance and F. A. Examinations at Vellore College. Then he did his BA, with honours in philosophy at Madras Christian College. Then he got his M.A. in 'philosophy' from Madras University in 1907. He had been a very bright student all his career.

Dr Radhakrishnan's public life began when he was appointed a diplomat to the Soviet Union. In 1952, he left for India to assume the office of the Vice President. After Dr Rajendra Prasad, he was elected President of India in 1962. In 1963, England conferred on him her highest title 'The Order of Merit'. After completing his tenure as the President of India, he bade a goodbye to public life. He passed his last days in Madras. He breathed his last on 6 April 1975. With his death, the lost a great teacher and a great philosopher.

Dr Radhakrishnan was a man of profound learning and wisdom. He was a jnana yogi. Besides his teaching, he wrote a lot of books on philosophy. Through his speech and writing, he acquainted the world outside with the Indian philosophy. He began his life as a teacher and ended as the Head of the State and earned the highest honour for his merit. He was an ideal teacher. So by observing his birthday as the Teachers Day, the Government has revived the age-old tradition of showing honour to our teacher community.

Related Essays and Paragraphs for School and College Students.