Essay on Environmental Pollution for Kids and School Students 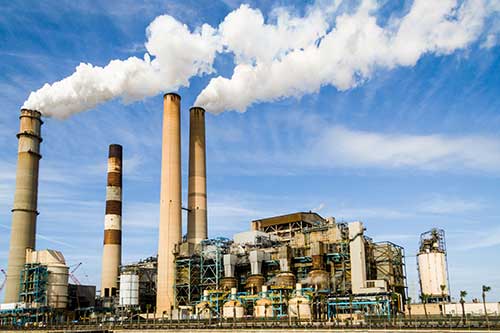 1. The air, water, land, nature around us make environment.
2. In the past our environment was clean.
3. Now it has been polluted.
4. Human wants rapid progress.
5. We set up industries, real cities.
6. We have introduced traffic.
7. We cut down forests recklessly.
8. It imbalances air.
9. CO2 is growing which causes global warming.
10. It is a great problem for the humanity.

The things all around us are said to be our environment. It is a combination of land, water, air with the world of living beings and vegetations. There has been a wonderful balance in the environment created by Nature all down the ages, and this sustains life on earth. But man is the most intelligent creature has tried to exploit Nature for his benefit. He has applied the inventive skill to make use of the resources in his own way. It has distributed the ecological balance leading to pollution. Our desire for using natural resources for our so-called progress and prosperity have made us destroy our environment causing great harm to our lithosphere, atmosphere, hydrosphere and biosphere We will certainly be in trouble in future. So, we should protect our environment at any cost.

Environment means the things that surround a man and influences his life and activities on earth. This environment consists of the natural things like lithosphere, biosphere, atmosphere, and hydrosphere. Nature has maintained a balance in these spheres, and it is man’s primary duty to see that he should do nothing to create an imbalance in nature and thus bring about his destruction. But man has become so powerful that he has controlled the vast forces of nature for his material gain. He has made the land yield more crops, cut down forests to have more land for agriculture, built dams on rivers to irrigate the agriculture land and produce electricity, dung mines, exploited natural resources and set up industries to make use of them. It is true that we exploit our natural resources, but we should not forget that it is our moral duty to preserve them for our sake. If we go on cutting down the existing forests without taking serious steps to grow them back, there will be severe floods, soil erosion and drought conditions all over. It will also increase carbon dioxide in the atmosphere causing great damage to its ozone layer. All this will affect our climate. So we should do our best to save our environment at any cost.

Introduction: The things that surround a man and influence his life and activities are known as his environment. In the name of industrial progress; we are destroying the balance in our ecology. This is because we are digging out more and more mines to exploit minerals, cutting down forests, destroying the animal world, s setting up industries all over and letting out refuses into rivers and seas or exposing to the air and thus causing a lot of pollution on earth.
The Advance Countries are mostly Responsible for this:It is the most advanced countries that cause pollution on earth, and this affects even the backward countries that are quite innocent of such things. It was the U.S.A. that first drew the attention of the world to the danger caused by environmental pollution. A deep concern was expressed at the U.N. Conference, and the World Health Organization was set up for the study of environmental pollution all over the globe. Now the need for environmental ethics is accepted by one and all.Industries  Progress:There is huge environmental pollution in our country. In the name of so-called progress, we are destroying our ecological balance. We are poisoning our air and water, poisoning the food we take in because of our industrial progress. An increase in our use of detergents, insecticides, fertilisers and such other chemicals has poisoned our essentials like water and air. Besides these, buses, cars, aircrafts, trains, factories, etc. let out a lot of poisonous smoke into the atmosphere causing an imbalance in it and destroying our ozone layer. The factory wastes and human refuse are dumped into our rivers and seas, polluting them. The ecology in the Himalayas is in danger thus causing the water of rivers like the Ganga, and the Yamuna polluted.Our government is out to check pollution:Now our government have set up the Department of the environment to meet the challenges of pollution. A national committee on environmental planning has also been constituted which expressed grave concern over the massive pollution in the country. But this is not enough. A nationwide campaign should be started against pollution. People should be educated about the evils of it. The industries should be asked to make arrangements for installing anti-pollution equipment.The waste materials let out by the industries should be recycled and reuse to check pollution. Our rivers and seas should be made free from contamination.Trees should be planted on a large-scale all over the country. Community forests should be encouraged in rural and industrial areas for cleaning the atmosphere. The shooting of wildlife should be strictly banned. The public should be educated in the preservation of their environment.

In India, everything is considered in the light of dirty politics. However reasonable the steps may be, they are spoiled ultimately. The political persons and the people in power are responsible for cutting down our country's forests and causing pollution in a large-scale without realising that they too, like others, live in the same polluted atmosphere. So, strong and positive steps are necessary to check pollution and keep our environment free from its evil effects.