Essay on Mahatma Gandhi for Kids, Children's and School Students.


Mahatma Gandhi was a very practical person. Many people lovingly called him Bapujee. We have provided a helpful and useful - 10 Lines, 100 words and 150 to 200 words essay on Mahatma Gandhi. You can choose anyone according to your necessity. 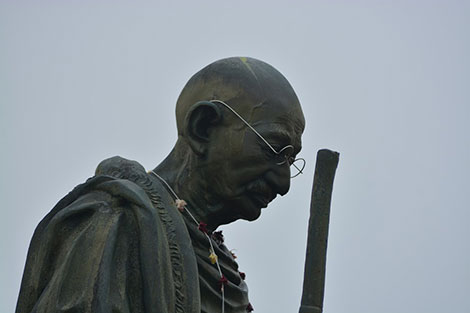 1. Mahatma Gandhi is also called as the father of our nation.2. He was born at Porbandar, Gujarat on October 2nd, 1869.3. His childhood name was Mohandas Karamchand Gandhi.4. His father was Karamchand Gandhi and mother was Putlibai.5. He went to England to study law.6. He remained away from meat and fish.7. He was very straightforward, truthful and honest.8. He fought against  British Raj in India.9. He taught the world non-violence.10. He died on January 30th, 1948.


Essay on Mahatma Gandhi (100 words)Mohandas Karamchand Gandhi is the full name of Mahatma Gandhi. He was born on 2nd October 1869. He was a sincere man. He never told a lie. He has a pure heart. He helped everybody. He wanted to see everybody happy. He made his country free in 1947. He had to go to jail several times. Obeying him, his countrymen also went to jail in large number. The truth was his great power. It was the very breath of his life. He was also a love of nonviolence. He was also a lover of non- violence. He was successful in life. Gandhiji was one of the greatest men of the world. He is called the Father of the nation. We loved and admired him.


Essay on Mahatma Gandhi (150 to 200 words)Mahatma Gandhi is known as the father of our nation. Gandhiji was born on October 2nd, 1869, at Porbandar in Gujarat. His father was the Dewan of Chief Minister of Rajkot State.  At the age of 19, he went to England to study law. On his return to India in 1891, he set up his practice as a barrister. Two years later he had to go to South Africa to appear in a law case. He remained there for several years to fight off the Indians settled there. Gandhiji introduced his methods of Satyagraha or non-violent peaceful resistance against injustice. Gandhiji was sent to Jail again and again with his followers. At last, his movement became successful when the India Relief Act was passed by the government of South Africa in 1928. On his return to India Gandhiji begin to fight for her independence from British rule. He was a strong believer in truth and non-violence. He started his non-cooperation Movement. He was arrested many times and put in jail together with lakhs of his followers. At last the British had to leave India in 1947 and India became free. This made people angry, and on the 30th of January 1948, he was shot by a misguided young man Nathuram Godse at Delhi. The whole world was full of grief.  Gandhiji is no more with us, but he will always remain alive in our hearts. Related Essays and Paragraphs for Kids and School, College Students.Essay on Jawaharlal Nehru
Subhash Chandra Bose EssayEssay on Republic Day of India Essay and Importance of Independence DayNational Integration  EssayThe National Flag of India EssayPatriotism Essay