Essay on A Journey by Bus for Kids and School Students

Nowadays it is very tough to travel on the bus. If you go by train or aeroplane, then it will be good. We have provided several useful essays for children, Kids and school students. You can choose anyone according to your necessity. 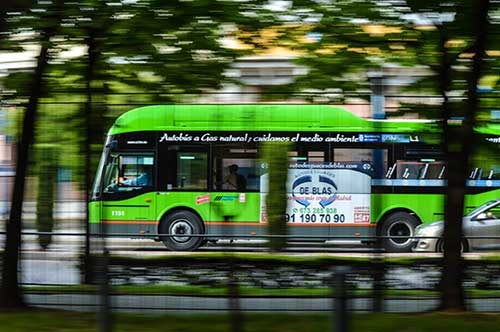 10 Lines Essay on A Journey by Bus

I wanted to go my uncle's house at Megha Jolie. I caught the bus from Mega Jholi at 7:30 a.m. It was full of passengers. It moved on, stopping here and there to take passengers. It was halted at Digha for some time. Then it moved on. At Dengausta,  it left the state highway and turned left. Now the sights outside were interesting. It was passed several villages on the way. At last, it reached my uncle's village.

I went to Sambalpur with my mother in a bus. From home, we went to the vehicle-stand in the rickshaw. We paid bus fare to the conductor and bought tickets. It was started at 4:30 p.m. There were many passengers on the bus. We reached Sundargarh at 7 P.M. It was stopped for some time, and we all had tea. Many passengers got down at Sundargarh, and few came in. We stopped again at Jharsuguda and reached Sambalpur at 10 p.m. We hired a taxi at the vehicle-stand and went to my uncle's house. It was a pleasant journey.

"To wait for a bus," says  Chesterton, "is the greatest adventure of one's life. I do not, however, agree with this view. To me, waiting for a bus is most boring. I will relate my personal experience. Once I had to go to New Delhi to see an English film 'Oliver Twist'. It was Sunday. I reached Ajmeri gate with my friends well before time. At the bus stop, we were told that as the 4:45 P.M bus would come at  5:00 P.M 'Oh God'! I sighed,  ‘5 P.M.’ The cinema show would start at 6:00 P.M. One hour. 'Yes, we will get to the show in time, said Ramesh. We took tea at the wayside stall to pass the time 5:00 P.M., 5:20 P.M. Still no sign of the bus. Time passed miserably for us when at 5:45 we saw a bus coming up at last. Mohan jumped with joy. We will get the show ----15 minutes more--. it's only ten minutes run to Connaught Circus'. We jumped as soon the bus as it came to a stop. We clung to it for dear life. It was all already jam-packed. However, it managed to reach Rivoli cinema just in time, and we could see the show after all.

Travelling on a bus gives us a mixed experience pleasant and unpleasant.  Nowadays most of the buses in our State are crowded with passengers. The reason is the number of buses playing along a route is not sufficient. So we all destined to travel in crowded buses.  On a Sunday afternoon, I along with some passengers was waiting for the bus to Gopalpur at a bus stop. It came in a few minutes and halted there. It was already crowded. But we were anxious to pass out Sunday afternoon on the sea beach. So we were in a mood to board the bus anyhow. The conductor asked us to obtain tickets from him one by one and get into the bus. As we were doing it, a middle-aged man came from nowhere and tried to get on the bus without obtaining a ticket. The conductor stopped him but he would not. He stood in the doorway and started arguing with the conductor. We shouted at him to get down and allow us to get into the bus. But he would not listen to us. We were all fed up with his show. The conductor, however, pacified us and forced the man to move away from the front doorway. Now we got on the bus one by one. The troublesome passenger had his ticket and got on the bus. He had no alternative but to accept it.  At the signal from the conductor, it was moved on.
It halted at every square in the town to lift the waiting passengers. Now it was fully crowded. Everybody inside felt choked. As it was glided on, we had a pleasant swing because of our standing position. When the driver applies brakes, we had a big jolt. But as we clutched at the cross-bar fixed to the ceiling of the bus, we could save ourselves from the possible fall. A few passengers alighted on the way, but there seemed no change in the crowd. Some of us were disgusted with the conductor who gave a lift to every passenger on the way. But he is not to blame. No bus in our State runs as per capacity. The standing passengers in a bus are always more in number than the seated ones. This is the usual practice here. The police do not check it. Moreover, most of the buses belong to private bodies, the conductors are supposed to think of the benefit of the owners but not the interest of the public. So we are destined to travel on crowded buses.

A bus journey from Berhampur to Gopalpur may take at about half an hour. But it was already consumed this period only to reach the Engineering School. The journey was really boring because of frequent stoppages on the way. The conductor does not think of the comfort of the passengers. Probably he takes them for lifeless things. So he gives a lift to everyone that comes on the way. The number of passengers alighted on the way was very limited. Everybody on it wanted to go  Gopalpur to pass the Sunday evening on the beech. After an hour's journey, our bus reached Gopalpur.  I heaved a sigh of the relief when I alighted from the bus at my destination. My journey in a  bus came to an end. The troublesome passenger was busy exchanging hot words with the conductor. But I did not wait there to waste my time, and I quickly went to the coast of the sea.